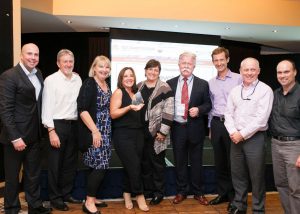 Andrea Galloway, Evolve Housing CEO was honoured to accept the award on behalf of the organisation for the second year in a row.

“This award is a testament to the dedicated Evolve Housing team who work tirelessly to provide holistic and ongoing support to Evolve Housing tenants and residents. As the issue of housing affordability and homelessness continues to dominate the Australian conversation it is more important than ever to advocate for continued investment in social and affordable housing,” said Ms Galloway.

As the joint state winner, Evolve Housing will now be entered in to the Australasian Awards where the winners will be announced at the 2016 National Housing Conference later this year.

Evolve Housing prides itself on being one of Australia’s largest Community Housing Providers (CHPs), with approximately 4,200 social and affordable housing properties owned or managed that are home to 12,000 people who were homeless or in housing stress.