With the help of Evolve, Andy Waite is living independently for the first time in his life 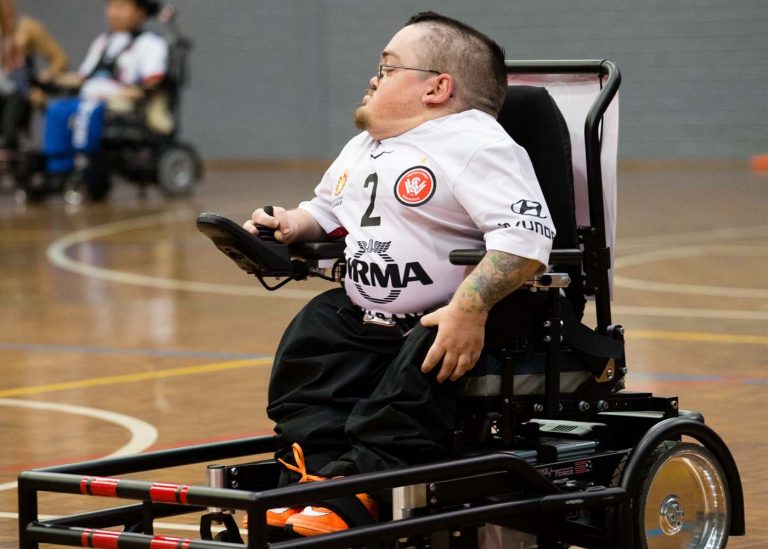 With the help of Evolve, Andy Waite is living independently for the first time in his life, in a state-of-the-art, $2.3 million accommodation complex in Parramatta.

Growing up, Andy never imagined he would move out of his parent’s home. As one of an estimated 80 Australians living with the rare physical disability Morquio, Andy uses a wheelchair for mobility and has a range of physical characteristics that can make daily tasks difficult to manage.

Like an estimated 28,000 other Australians with disability, Andy was, until recently, held back in his quest to be fully independent by one major barrier – a shortage of appropriate accommodation.

Andy said because his family home was not wheelchair accessible, many of his friends were unable to visit and he was prevented from doing basic tasks such as cooking on his own.

Andy now has a new place he calls home: his own apartment in a modern, universally accessible North Parramatta complex, made possible thanks to a partnership between disability service provider Northcott and Evolve Housing, as part of the Australian Government’s $60 million Supported Accommodation Innovation Fund.

Andy says being able to socialise with his friends more, cook for himself, hang out his own washing, and generally take care of himself, has improved his confidence and given him the independence he was seeking.

“Not having to rely on my parents was a big thing,” he says. “Where I lived [before] wasn’t wheelchair accessible so I always had to rely on someone around to help me. The kitchen wasn’t accessible so I couldn’t cook for myself.”

Since moving into his new accommodation, which features a small courtyard, Andy has been able to have his friends over more. “There’s enough room to fit a barbecue. I love to entertain when I’ve got mates over – to cook a steak while they’re inside screaming at the TV because their team is either winning or not doing so well,” he says.

“It took me a while to learn how not to make things charcoal, but I got there after a couple of months and things became edible!”

Unsurprisingly, Andy’s relationship with his parents and sister has improved drastically in the two and a half years he has been living on his own. “I’m getting on a lot better with my parents since I moved out of home,” he says.

“Mum’s there for me: I can call her if I need cooking advice, without her having to take over for me. I’ve also got dad who works close by so if I ever need help he can come over after work. I’m getting on a lot better with my sister now that we don’t see each other on a daily basis.”

Despite the extra obstacles Andy faces on a daily basis, the Information Technology worker has chosen not to let his disability stop him from living life like most other young men his age. Andy has tattoos, likes hanging out with his mates, is a diehard fan of the Western Sydney Wanderers FC – and even captains its Powerchair Team.

“The greatest achievement for me so far, aside from moving into here and gaining that much more independence would be wheelchair sports and playing Powerchair football for the Wanderers,” he says. “We just won our first championship, which has been huge for us and something I’m really proud of.”

“We’ve got the World Cup coming up next year in Florida and hopefully on the backhand of what we’ve done this season we can push to get selected for the Australian team,” he says.

For Andy, the future is bright: there is much for him to look forward to. “I’m really looking forward to what the future holds,” he says.